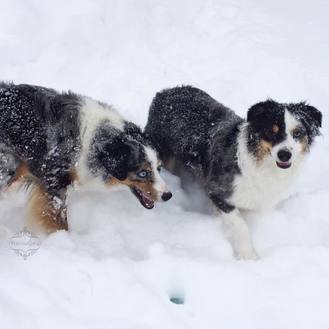 ​The Miniature Australian Shepherd was recently recognized by the American Kennel Club who changed the name of the breed to Miniature American Shepherds. The history of the Mini Aussie is different depending on where you read. Most registries such as MASCA, and MASCUSA state that they are direct descendants of regular Australian Shepherds where they were selected for a smaller size among other qualities. Since 1978, the lines of Mini Aussies (directly from their Aussie ancestors) originated from a breeder named Doris Cordova in California.

The Mini American (formerly Mini Aussie or North American Shepherd) was bred to resemble an Australian Shepherd but in a more compact size. The herding and working instincts found in Aussies were selected for as well. They may have a tendency to herd children or other animals if not trained or corrected at a young age. They are placed in the Herding Group. Beside working sheep and other livestock, Mini American Shepherds or Mini Aussies are frequently seen in agility, fly ball, frisbee, and other competitive events. Other characteristics of the Mini American Shepherd, like their ancestors, are trainable, intelligent, loyal, affectionate, active, attentive, agile, and social. However, sometimes they can be apprehensive of strangers. With such a high energy temperament and a readiness to please, Mini American Shepherds require enough mental stimulation and physical exercise so they do not become destructive. However, they usually require less stimulation than an Australian Shepherd might require. Mini Americans also have a tendency to be "Velcro dogs" and can develop separation anxiety. We recommend crate training your puppy from day 1.

Regarding the health of Miniature American Shepherds (& Mini Aussies), there are some things to look out for. MDR1 is a mutation that occurs in a lot of herding breeds. If they are affected by this mutation, they have adverse reactions to certain medications such as Ivermectin which is found in many canine dewormers. The only way to know if this mutation is present is through DNA testing. Other DNA tests and genetics disorders that are commonly checked for in breeding Mini Americans include: prcd-PRA (Progressive Retinal Atrophy), CEA (Collie Eye Anomaly), CD (Cone Degeneration), DM (Degenerative Myelopathy), HCM (Hereditary Cobalamin Malabsorbtion), eye CERFs, OFA Hips, OFA Elbows, OFA Luxating Patellas, and a few other concerns. For more information on genetic diseases, please visit our page called GENETIC TESTING or click the button below.
Genetic Testing Page 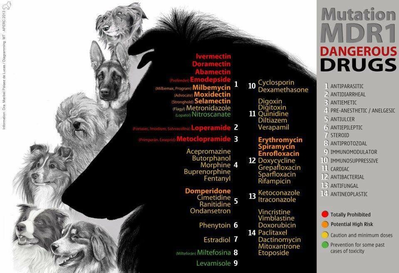 Aussies and Mini Americans come in many different coat variations.  If we are technical, there are two accepted coat colors (black and red) and two accepted coat patterns (merle & solid) which are inherited independently. The chart below shows a variety of color, pattern, and markings (such as white or tan) and what they are called. 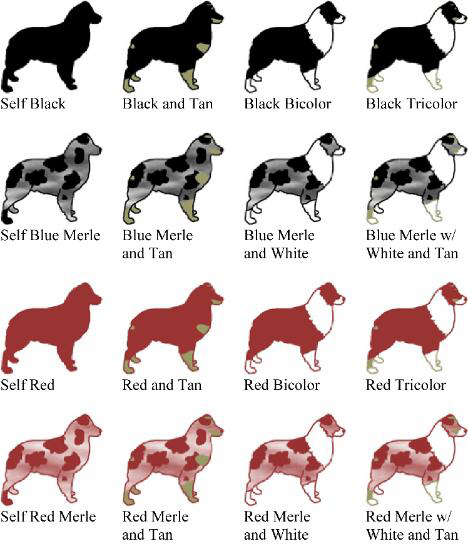 One very important thing to mention about Mini Americans and Australian Shepherds, no matter big or small, is the possibility of a "Lethal White" genotype. If a merle patterned Aussie were to mate with another merle patterned Aussie (no matter what color), there is a 25% chance that their offspring would be homozygous for a merle patterned coat. The phenotype for this genotype is shown to have excessive white and a very high chance that the pup is blind and/or deaf or a number or other genetic issues. Many of these pups are euthanized or rejected and sent to rescues because of this. They require very special care and training.