I recommend all breeding dogs and family companions to be testing for Multi-Drug Resistance. It will aid you and your veterinarian in choosing safe medication and doses. If your dog and your dog's sire and dam have not been tested, please treat your dog as "affected" by the mutation until proven otherwise by testing. Even after testing, it is wise to stay away from problem drugs when there are options available.
FOR MY FULL REPORT ON MDR1, CLICK  THE FILE:
Includes: Table of Contents, Abstract, Introduction, Review of Literature, Summary, Bibliography, Appendix
(Includes specific drugs and recommendations by WSU) 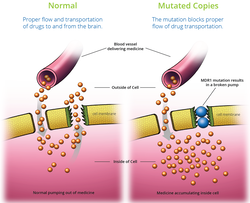 One of the stories behind the discovery of this gene mutation involves an experiment with mice. The MRD1 gene is a common and important gene among mammals, including humans. A laboratory in the Netherlands genetically engineered mice to remove the MRD1 gene in order to see the effects. After quite some time, the researchers did not see any different between the control mice and experimental mice. The experimental mice were just as happy and reproduced just as fine as the control mice. However, eventually there was an infestation of mites among the mice colony. The laboratory technicians, as per protocol, sprayed the infestation with an Ivermectin spray. The next day nearly all of the experimental mice were dead. Thus the sensitivity became aware and testing persisted.

This MDR1 gene mutation causes the affected dog to be defective in their ability to limit absorption and distribution of certain drugs. Delayed excretion of the drugs can cause severe drug toxicity. Symptoms of this toxicity vary depending on the drug that was given. Some of the common drugs that are affected by the mutation are as follows: Acepromazine (a sedative), Butorphanol (a sedative commonly given before surgery), Ivermectin (contained in heartworm preventative, antiparasitic), Milbemycin/Interceptor and Selamectin/Revolution (antisparasitic), Loperamide/Imodium (decreases diarrhea), and a continuing list of other drugs including anticancer drugs. Sources of information vary from 14 to 30+ as the number of affected drugs. Some sources say that the amount of drugs given in a normal dose for a dog is not harmful while other sources say that any of the affected drugs, even in little amounts, is harmful to a dog with this mutation.

This defect is passed on as a single allele would be. The sire and dam are either Normal/Normal, Normal/Mutant, or Mutant/Mutant. If they are a carrier, most sources say they should not be affected by these drugs. Most breeding dogs are required to be Normal/Normal with the exception of the occasional Australian Shepherd or Collie.

To test for this gene mutation, a cheek swab or blood sample must be submitted to one of the many companies that test for it through DNA samples. Washington State University offers a patent protected diagnostic test and is the most reliable source since they first discovered the mutation and established the testing. Other sources of testing are PawPrint Genetics, Gensol, and VetGen.

To learn more about this topic, please visit:  https://vcpl.vetmed.wsu.edu/ 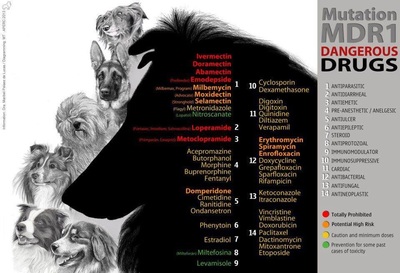 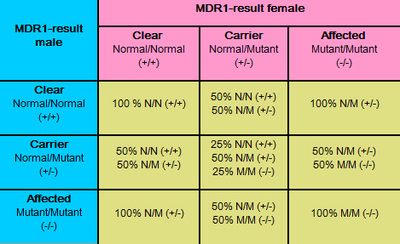